On July 16, 2013 Jerry was hit broadside by a truck while riding the Kymco scooter. The guy roared out from a rolling stop trying to beat a car coming from the other direction and never saw Jerry until the impact. Among other injuries and complications, Jerry suffered a broken left collar bone, broken left shoulder blade, torn tendon in his right shoulder and massive bruising. The scooter was totaled as it went under the front of the truck. Thankfully, the whole incident was captured on Jerry's helmet cam. You can see the wreck video on our YouTube channel.

Jerry was wearing all of his riding gear including a full faced helmet, armored riding jacket, riding boots, riding gloves and jeans. Imagine how much worse his injuries could have been had he been wearing shorts and a t-shirt! We ended up selling our 2012 Can Am Spyder. We're not sure if we'll get another bike or not, we don't think Jerry could handle another crash (even though this was his first ever wreck in 34 years of riding) and unless his right shoulder improves, he couldn't operate a bike safely anyway. It sucks to have something you enjoy so much taken away from you due to the negligence of another driver.

As of January 2016, Jerry had shoulder surgery related to the accident and had to go through a ton of physical therapy. The persistent problems he has with his right shoulder severely limits what he can do and it has a huge impact on his life. Any future adventures will have to be in our campervan. We link to our annual road trips over in the right hand column if you'd like to follow along.

UPDATE: The case regarding the wreck settled in February 2017. Jerry has healed up as well as he ever will and he bought a 2016 Honda NM4. All of his riding pictures and videos will be on this page. 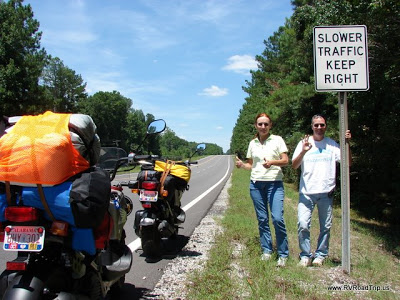 Here's a story CBS 42 in Birmingham did on us when we had only been to 37 counties! By the way, we won the contest.

Many other news channels and web sites across the country ran the story also. Click here to read the text of the newspaper article that was distributed nationally by the Associated Press News Agency.

New comments have been disabled due to spammers.